Ancient African proverb: “A man without culture is like a zebra without stripes.”

“Mike Boon, a white, was on the mean streets of Soweto photographing anti-apartheid graffiti when he was caught by the mob. About 1,000 supporters of the Pan African Congress – motto: one settler, one bullet – had beaten him, doused him with petrol and were preparing to burn him alive in a horrific spectacle known as necklacing.

“They had the tyre, although they never put it around my neck, and they were shouting for matches,” he says. Mr Boon only escaped a hideous death because he speaks fluent Zulu, and was able to persuade his captors that he was there to promote their cause.”

Mike teaches us about animal poop on his Game Reserve

Mike, the multi-lingual ex-special forces peace-loving folk music guitar-picking minstrel, who founded a marketing company in the 1980’s in a rags-to-riches story. His vision: creating community-based, culturally-targeted delivery of product messages into the hands of people on the streets and in the townships of South Africa.

Under his leadership, Group Africa grew into a multinational organization of 7000 employees operating in over 25 countries in just 17 years. As he tells it, Mike grew tired of constant international travel and the burden of corporate leadership, and sold his business to an American public relations giant.

For his second act (or third, really, if you count his time in the military), Mike launched the Vulindlela™ Network to help bring about personal and organizational VUKA! — interventions to foster cultural and social understanding and shared vision. Mike’s work brings about reconciliation. Mike’s bio states:

“His work unashamedly acknowledges and deals with the inherent racism, prejudice, anger, fear and denial…”

Tuff stuff, the challenges Mike takes on. What can I say? He’s Superman. So, by now you’re probably wondering how I know Mike. Let’s take a trip back in time.

I met Mike Boon in 1974 at a Southwest Texas Rotary International meet ‘n greet for incoming and outgoing exchange students. Mike was going to high school in Gonzales, Texas for the year. I attended San Marcos High School, and had been selected to spend a year in Denmark. Mike and I hit it off immediately.

What I remember most about Mike? His to-die-for accent, easy laugh, and deep dives into the meaning of life. He taught me a bit of Xhosa, an amazing clicking language; and introduced my family to a more efficient method of left-handed eating — keeping the fork tongs-down and the knife in my right hand. We Americans tend to eat right-handed with the tongs facing upward, switch the fork to the left hand tongs-down to cut, then switch back to the right hand tongs-up to eat.

Mike faced a mandatory 2-year term in the military when he returned home to South Africa. I couldn’t imagine the soft-hearted, deeply thoughtful, easy-going boy carrying a gun. Much less shooting it. Much to my surprise, but not really because Mike always exceeded expectations in everything he undertook, Mike went into the military and earned a spot in the elite special forces. The letters he sent from active duty had sections literally cut from the pages.

Mike always wrote me about fighting injustice, opposing the forces of evil, standing up for what’s right, understanding the core of humanity. Deep stuff. Mike stuff.

Mike and I stayed in touch on and off through the years. Our lives took so many different turns. I knew Mike had written a book, and that he’d done well. I had no idea HOW well. We lost touch about 10 years or so ago when my Christmas letters started bouncing back. I kept sending them, they kept returning. Enter the age of the internet. Mike found me a couple of years ago through NASA. I’d spent a few years as Editor of NASA.gov. I’d left digital fingerprints everywhere.

Our friendship spanned decades and continents, yet we’d not seen each other for 35 years. Until this summer. 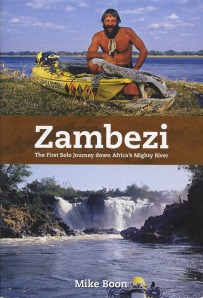 I learned so much about Mike, the man, during our visit to South Africa. I had really only ever known the boy. Spending time with Mike and his family helped fill in the gaps. Ok, not gaps. Craters.

Reading both Mike’s books before our visit, helped remind me who Mike is — Mike, the philosopher. No depth is ever deep enough for him. He’ll always dig down and uncover another layer of understanding. We are alike that way. I really need to understand what drives things, what makes pieces fit together. I appreciate the way Mike approaches a problem and finds a way around an impasse.

Mike deals with culture in his ground-breaking 1996 book, The African Way: The Power of Interactive Leadership. Reading this book, I understood, for the first time, some of the cultural issues we face, even today, in the United States.

Mike describes the “Western” view of time as individually-focused — control is internal. For instance: “I missed the bus.” Yet the traditional African view of time is circular, where “the past is more important than the future.”  In Zulu, the expression would be, “The bus left me.” In Xhosa, “The bus died on me.” Both are externally-controlled. (p. 6-7) He notes that the pace of business based on an internal or external focus is fundamentally different. On the question of when it’s time to “move on” — forgive and forget — to order to repair the nation after apartheid was abolished, Mike offers this: “The ‘African’ view would be that a considerable amount still needs to be done to settle the damage done by apartheid.”

In a circular view of time, where the past is more important than the future, how long is long enough?

I absolutely have no answer, but at least I understand the context. 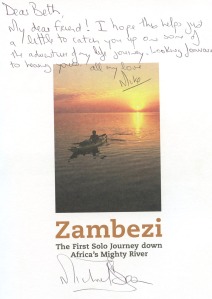 Reconciliation seems the focus of Mike’s second book, Zambezi, The First Solo Journey Along Africa’s Mighty River. 1n 2002, Mike embarked on a solo expedition down the Zambezi River from source to sea in a kayak, which had never been attempted before. Missionary-explorer David Livingstone traveled by boat down the Zambezi in the 1850-60’s, and nearly lost his life. Others attempted the journey though the centuries, but never the entire river. Mike knew he would be traveling through war-torn countries and areas of civil discontent. His trip included: Northwest Zambia, Angola/Zambia border, Angola, Zimbabwe, and Mozambique. The river itself has unchartered areas with unknown rapids and falls.

In his own words, here’s Mike’s assessment of his chances on the river:

“In addition to the political and geographic challenges, I had to prepare myself for any number of medical eventualities. Injury and trauma could be caused by assault or bites from snakes, hippos, crocodiles, and other animals. Possible illnesses included malaria, hepatitis, dysentery and infection. I needed to be able to self-administer any number of treatments, such as suturing wounds, setting fractures and carrying out amputations.”

Mike indeed encountered near-death in a whirlpool, abduction by military guards, close encounters with crocs, hippos, and elephants. His 99-day physical challenge brought emotional healing from Mike’s ‘military and corporate combat’ demons. The Zulus named Mike, “Chunge,” which means “he who achieves even though the road be difficult and torturous.” Perhaps he needs to replace the word “road” with “river.”

Mike, Man of Many Years, at last reconciled with Mike, Idealistic Boy of Long Ago.

During our visit in South Africa, I learned more about Mike’s work through the eyes of his former employee, Doug, who accompanied us to the Soweto Township, home of Nelson Mandela and Desmond Tutu.

Through Doug, I learned that Mike created the Lesedi Cultural Village for business partners to experience tribal life and better understand the people their products would reach. He recreated village life and brought in families to live and share their culture with visitors. He is no longer associated with Lesedi, which has become a successful tourist attraction, but he met his need to teach the “Western world” partners about African culture.

We visited an impoverished Township primary school. The school principal told us that the result of one of Mike’s VUKA! experiences, the bankers returned to volunteer with the kids and build a kitchen for the school. (They still need a regulation soccer field.)

Day Care has paint and furniture.

We spent time at a pre-school day care in SnakePark, the poorest section of Soweto. Two mothers couldn’t bear seeing children without care and on the streets. They formed the Big Smile Little Faces Day Care. As a result of Mike’s VUKA! experience,  a business group returned to volunteer and provide essentials for the children — desks, chairs, rugs, book cubbies, and more.

When I wanted to take pictures of the painted towers in Soweto, not far from Nelson Mandela’s home, Doug pointed out the towers were painted for the community as a result of a Mike’s VUKA! program.

Mike mixes rich and poor, black and white, male and female, young and old  — drawing them together through a transformation process that strips away preconceived  cultural bias and builds bridges of shared humanity.

I saw evidence of his success whereever we went. Mike’s ground-breaking reconciliation/facilitation work is sought at the very highest levels of business and government, including Nelson Mandela and the Dalai Lama. Mike was flown to the Middle East to resolve settlement disputes between the Jews and Palestinians. Is there anything Mike can’t do? Slow down, maybe. Hardly likely.

Mike’s new challenge: an 8-month river adventure through even more dangerous territory than the Zambezi to draw attention to prejudice in all forms.

But, I’d like to give Mike a different challenge, as if the elimination of prejudice weren’t enough. I’d love to bring Mike to NASA, to challenge our entrenched, bureaucratic culture. I’ve only been introduced to snippets of Mike’s work to bring about reconciliation.

The more I see, the more I want Mike to bring VUKA! to NASA.

Just think, we have our very own whirlpools, rocky embankments, hippos, crocodiles, and infected thinking to offer a tempting challenge to Mike. We’ve had 50 years to develop ruts and dysfunctional business patterns.

Those of you at NASA know what I’m talking about. Folks at NASA field centers and Headquarters often mistrust each other. Organizations build walls to keep out competing other organizations. Power is not often shared well. Threat to power…well, I shudder at the thought. Many individuals and organizations operate under the fear of retribution — for thinking or speaking outside what is deemed culturally acceptable by individual managers. Sad, but true.

Not all of NASA can be described this way, of course, but enough exists to warrant at good look. Good news, though. We have a new leadership team at NASA. What better time to bring Mike in to wake us up, transform our thinking, ignite us for the future? We have much work to do.

Mike welcoming us to Annie's Treehouse, an aMAZing retreat he built for his wife!