Have I ever told you why I drive a Saturn? You can blame it on NASA.

In 1990, NASA Headquarters brought me up on assignment from the Johnson Space Center in Houston to work on a new team — the first Office of Exploration. We were formed following the 90-day Moon/Mars Study requested by President H.W. Bush.

My task: design an evolving organizational structure to adapt quickly to change over a 30-year program of unknowns.

In carrying out this assignment, I looked for models of success. I researched bureaucratic organizations that spun off creative teams– to break free from entrenched culture. General Motors’ Saturn company offered wonderful parallels for NASA.

The more I learned about the spanking new Saturn company, the more I fell in love with it. I couldn’t wait for my little Chevy Nova to croak, so I could buy my first Saturn. Once I became a proud Saturn owner, I entered the tight family circle — I slipped inside the rings around Saturn. I attended cook-outs at the dealership and new owner workshops to learn how the engine worked. I bought Saturn mugs and stuffed animals. The Saturn guys sent me birthday cards and notified me of company news. They even hosted a yearly get-together for all Saturn owners at their home plant in Tennessee.

Saturn success offered hope of a similar culture change at NASA for spin-off organizations. Sadly, their experiment in open environment failed to reap profit for GM. GM is shutting down the Saturn line.

As I sat in the Saturn dealership yesterday with other Saturn owners, we lamented over the death of our dream — a car company that offered affordable style and trustworthy employees. But a funny thing happened, we had a lovely morning talking about space.

We started talking about On-Star, which somehow led to satellites, which led to the retirement of the Space Shuttle, Russian Soyuz and the transportation gap, President Obama and new directions for space, opportunities for commercial space, SpaceShipTwo venture, Chinese and new space-faring nations, radiation effects on humans on Space Station, and much much more.

One of my fellow-Saturn owners went to high school with former Astronaut Pierre Thuot. Thanks to my iPhone, I could look him up and share what missions Pierre flew on.  Another fellow-Saturn owner shared MIT advances and how they might be applied to space travel. When his car was ready, he told me he’d rather stay and chat.

Upon retrospect, I find the cycle fascinating:

Two orbits collide on a cold Saturday morning. What are the odds? Though I’m sad Saturn will no longer be around, I’m glad their grand experiment taught us lessons on culture.

Saturn company not only built a great car, they built a community — even though the business case failed to deliver profit.

Let’s hope NASA can learn lessons from Saturn about transparent culture and community-building. It’s not the vehicle itself (pick your spaceship), it’s all about creating a family circle and rethinking status quo.

Oh, and Santa, don’t forget to put the Saturn Sky in my stocking. 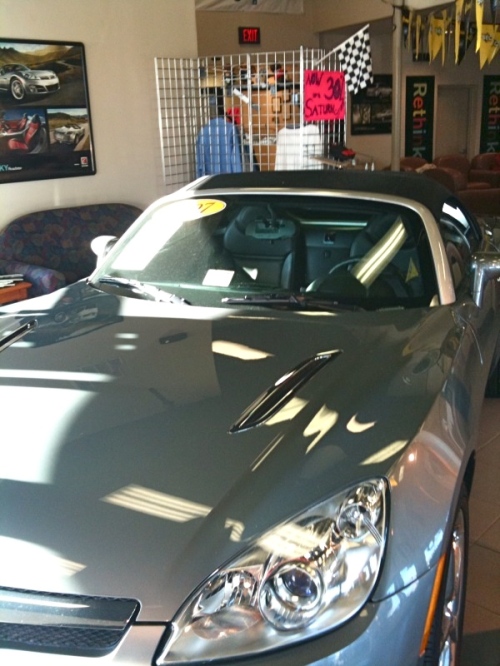 2 responses to “Rethink: Rings Around Saturn”