“Above all, watch with glittering eyes the whole world around you, because the greatest secrets are always hidden in the most unlikely places. Those who don’t believe in magic will never find it.” — Roald Dahl

After each mission, our astronauts visit the NASA Centers and Washington DC to share their stories and thank the staff who supported them before, during and after their zero-G adventures. This week, the crews of Space Shuttle STS-134 and Space Station Expedition 26/27 came to town. They spent time visiting the hallowed halls of Congress, and stopped by NASA Headquarters to debrief employees.

The crew shared photos and video from the mission, and answered questions. Box Johnson talked about the violent ride to orbit on the Space Shuttle on top of seven million pounds of thrust. Spacewalker Mike Fincke talked about his final spacewalks during a Space Shuttle mission. Roberto and Paolo were the first two Italians in space at the same time. We saw a clip of their chat with Pope Benedict XVI, another first in space. 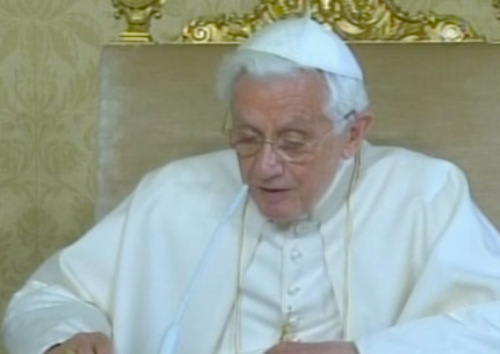 We had some special guests in the audience at NASA Headquarters for the briefing. @FlatSamantha was in the HOUSE! 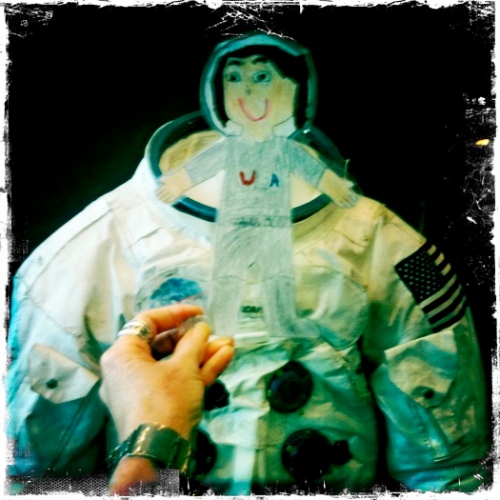 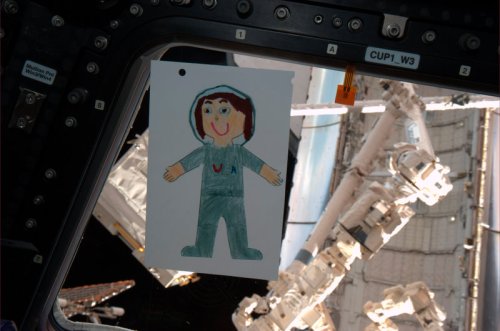 Box brought the photo back home to Earth, and offered to deliver the “flown-in-space” picture of @FlatSamantha to “the-real-Samantha” in person. What a guy!!

Box posed for photos with Samantha’s family and friends, including @FlatSamantha’s NASA tweetup escort Doug @CPUguru White (seen on the far right). “The-real-Samantha” is easy to spot in red.

Doug posted all his @FlatSamantha pics on Flickr. He’s got some great shots from the STS-134 launch tweetup and the visit to NASA Headquarters. Be sure to check them out. You can also read all his NASA tweetup blog posts, including Samantha’s story.

After saying goodbye to Samantha, we headed upstairs for the office lunch with the crew. I sat with Mike Fincke. He’s simply adorable. He was the first to become a space dad while in orbit in 2004. His wife gave birth while he was in orbit for six months on the Space Station Expedition 9 mission. He also holds the record for most days in space for an American: 382 days. (Oh, and Mike thinks space smells like burned medal, rather than burned cookies.)

As he talked, I noticed his fingernails. I asked if his spacewalk damaged them. He told us how the nail laminate peeled off inside the glove while he was working. He said he could feel it, but it didn’t hurt. One nail looked like he’d smashed it with a hammer. I knew spacewalker lost nails, but I’d never seen it before. 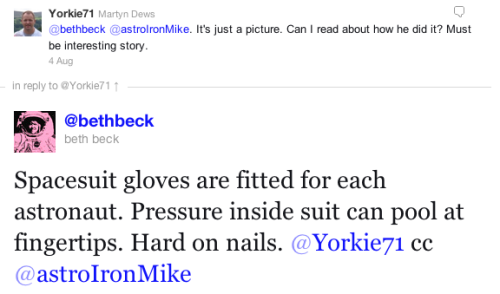 Having the crew come to town is always a highlight for me. I love hearing their stories. I love getting as close as I can to space. Our astronauts touch space. They look with glittering eyes at the world above us. They come back with answers to the greatest secrets hidden in the most unlikely places. They go to the extremes of where humans can go. They pave the way for others to follow.

Thank you space pioneers! You can invade our nation’s Capitol whenever you want. 🙂