“There are some people who live in a dream world, and there are some who face reality; and then there are those who turn one into the other.” — Douglas Everett

I really don’t have the heart to write about the end of an era. Many others are quite prolific in their opinions — both pro and con. I simply want to celebrate the coming together of NASA employees, families, friends, fans, as well as all the new tweetships forged at the Kennedy Space Center during the picture-perfect STS-135 Space Shuttle Atlantis final liftoff. 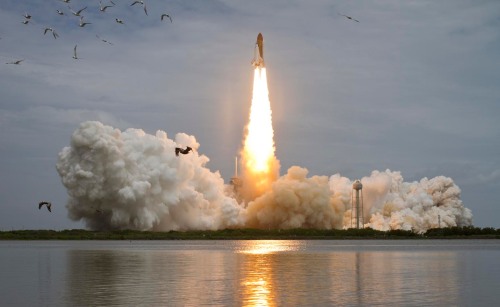 Honestly, I never believed we would launch on time with all the crazy weather the day before launch. Torrential rain. Lightning strikes near the pad. I’m SO VERY thankful for our sturdy TWent and plywood floor during the L-1 tweetup events. And it all started out so innocently. Look at the gorgeous blue skies on L-2:

That evening, the skies told a different story: 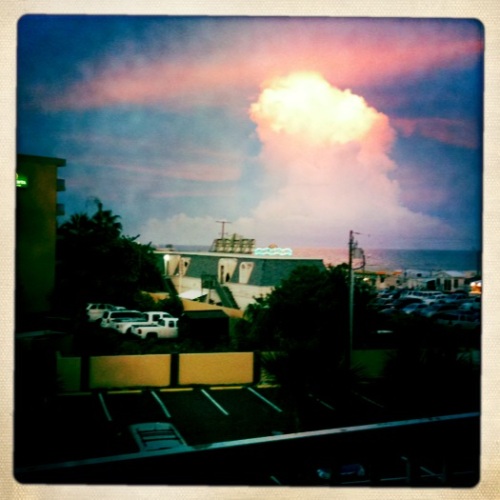 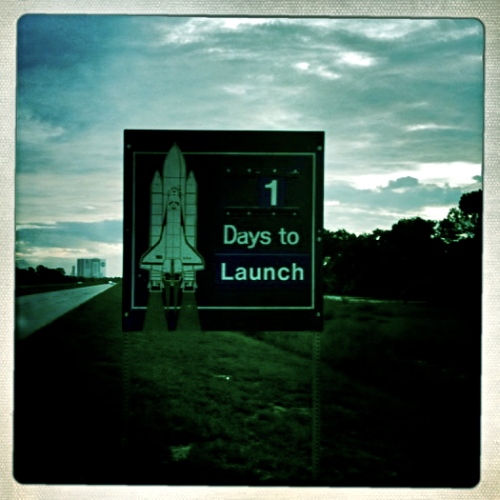 The weather outside couldn’t dampen the spirits INside the NASA tweetup TWent. Space tweeps, who know each other virtually, get to “meetup” for the first time.

Elmo tells @Astro_Mike he wants to be a teacher.

Quite the comedy routine. You can watch the U-Streamed video. We learned from @Astro_Wheels that space food tastes like warmed up plastic, and that a Soyuz reentry is like “going over Niagra Falls in a barrel that someone lights on fire.” @Astro_Mike told Elmo that we have to learn to get along on Earth and in space. Team work is how we get things done. @Astro_Wheels added that problem-solving skills are essential. Think Space Station Expedition 24  failed ammonia coolant Pump Module. Side note: Mike also informed Elmo that cougars live in the Bronx Zoo. (But, if you weren’t in the TWent or watching on U-Stream, that comment will make no sense. We’ll just leave it at that.) 😉

Next up: Bill Gerstenmaier, my boss and head of NASA’s Space Operations. He approves the funding to host mission tweetups, so give it up for Gerst. Virtual standing ovation! He gave us a state of the mission update, then the deluge trapped him in the TWent with us.

We draw a crowd. The press come in and out of the TWent — our ever present TWaparazzi.

After lunch, we headed out to tour the Vehicle Assembly Building (VAB) on the #COOLbus! See for yourself…

On our way to the VAB, @Astro_Ron Garan called from Space Station to say hello to the tweeps! Yes, you read it right. Ron called from space! The tweeps had just enough time to shout out their greetings before the call went out of range. Too cool for words. Right tweeps?

Inside the VAB, I always get emotional looking at the flag hanging from the top.

Funny story about the VAB: In the elevator back at my hotel at the end of the day, a boy was telling his mom about getting to go inside the B.I.G. where the orbiter is mated to the tanks. He was telling her it was the biggest building on site, and that’s why they named it B.I.G. I asked if he meant the V.A.B.? Too funny. V.A.B…B.I.G…they sound a lot alike, don’t you think? 😉 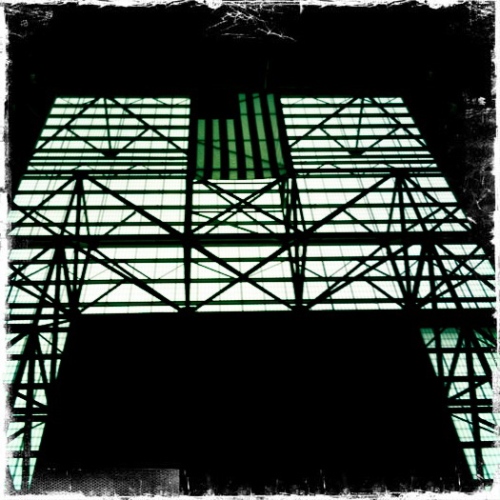 Flag inside the Vehicle Assembly Bldg

Next, we headed out to the launch pad to watch the Rotating Service Structure roll back from Atlantis, in preparation for launch. We’d heard the roll back was delayed due to weather, so I was pretty bummed…until, voila, Atlantis started peeking out from behind the structure. Wow. Atlantis in all her glory. Here we are in front of of the last Space Shuttle before her liftoff on the last Space Shuttle mission. Many thanks to NASA’s photographer, Paul Alers, who graciously agreed to take our picture, even though it wasn’t on his to-do-list. 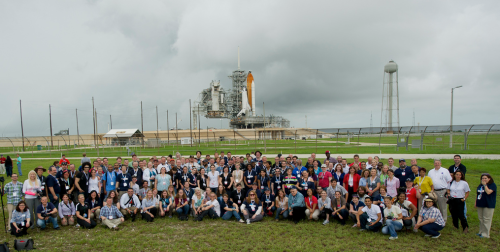 Overnight I slept with my iphone next to me. All night I checked for scrub email. Nope. Not a one. I left the hotel at 4:20 a.m. but I still didn’t beat the tweeps to the tent.

Take a look at Atlantis on the pad via Sarah Horst‘s twitpic. 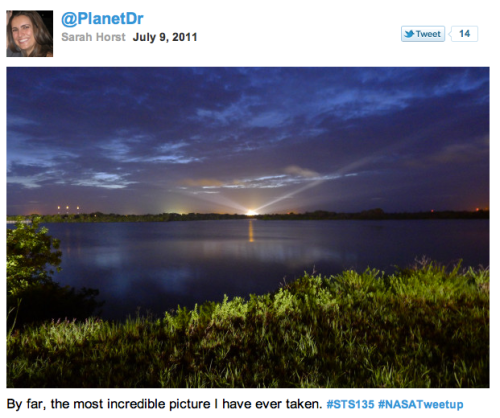 We had a steady stream of speakers all morning. NASA’s Deputy @Lori_Garver came back to chat; along with Laurie Leshin, Deputy of the new Human Exploration and Operations Office (we’re merging Exploration Systems and Space Operations); Chief Technologist @Bobby_Braun; STS-132 Pilot Tony Antonelli, and ROCKet star, Bob Crippen, STS-1 pilot, my former boss. I was running around, so I missed some of the drop ins.

We posed for our group portrait by the launch countdown clock, then headed out to see the crew in the astrovan on their way to the launch pad. No U-turns this time!

So many highlights to share from this historic event. A real tear jerker for all of us was the debut of Shuttle Fanfare, composed by Battlestar Galactica’s Bear McCreary through the teamwork of Seth Green, Mike Dougherty, and NASA. Seth introduced the tribute theme song for STS-135, and explained that he’s working on a Blog-umenary for the Fragile Oasis website detailing the process to create the song.

@Astro_Ron Garan called again from Space Station just before launch. This time I passed around my iphone for the tweeps to take to Ron individually. Quite a rush!! We’re hoping to compile a transcript of what everyone talked to Ron about.

But even as awesome as it is to talk to space,  the star of the show was Atlantis herself. What an amazing vehicle. What an incredible legacy.

The press site was crawling with humans and cameras. I wasn’t at NASA in the beginning of the Shuttle program. I’d never seen so many satellite trucks and viewing platforms. I’m thankful Atlantis drew a crowd. She deserved it. This photo of Karen James, STS-133 alum, paints a portrait of passionate enthusiasm we all felt. 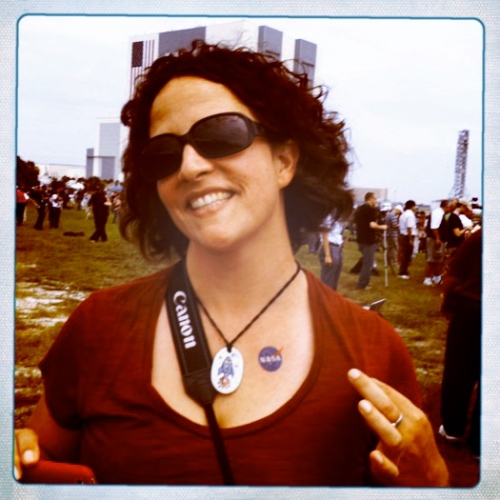 @keJames eager for Atlantis to liftoff

But we weren’t the only ones watching Atlantis leave this planet for the final time. The Expedition 28 crew onboard Space Station were glued to their screen.

No, it's not Sunday football. Expedition 28 crew watching Atlantis liftoff.

Here is my launch collage of Hipstamatic images of Atlantis breaking the bonds of gravity. 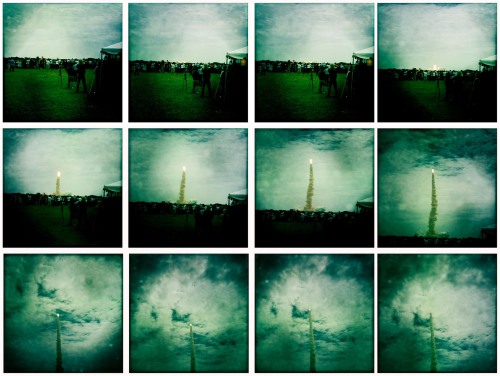 Collage of my iphone images of Atlantis leaving Earth.

Thank you space tweeps for making this final launch so special. You are part of the NASA family now! I think this picture says it all:

Big takeaway: We turn dreams into reality. Let’s go boldly into the future together.

For now, if you want to help make this world a better place, join Fragile Oasis and submit your own project. Founder and chief Bloggernaut @Astro_Ron is waiting to hear from you!!

What an absolutely BRILLIANT idea!

Think about it. Space agencies  in the United States, Europe, Canada and Japan worked together for years planning an orbiting laboratory in space. After the fall of the iron curtain, Russia — a former adversary — joined the partnership. Unprecedented. Our Cold War rival now our friend?

Our quest to move beyond the boundaries of Earth’s atmosphere lifted us high above political, cultural and language barriers that divide us on the surface of this planet.

15 nations came together IN PEACE to design, build, launch, and assemble our orbiting outpost — 22o miles overhead 24/7 orbiting every 90  minutes at 17,500 mph. 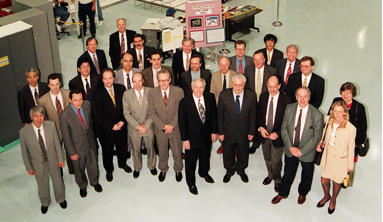 Here is a portrait of senior government officials from our international partner countries who came to Washington D.C.  on Jan. 29, 1998 to establish the framework of cooperation upon with the partnership was formed — representatives of Russia, Japan, Canada, and participating countries of the European Space Agency (ESA), including Belgium, Denmark, France, Germany, Italy, the Netherlands, Norway, Spain, Sweden, Switzerland, and the United Kingdom.

And it wasn’t easy. Just ask anyone who worked in the Space Station program.

I was actually hired to come work in the Space Station program back in 1985. At the time, Station was but a series of drawings, hopes and dreams — not to mention crossed fingers. In a staff meeting not long ago, Bill Gerstenmaier made a comment during a Space Shuttle mission that really struck me. He told us how amazed he was that all the assembly details that kept him up at night over the years came together flawlessly. It’s pretty incredible that we assembled ON ORBIT all the hardware, cables, and software built at locations all around the world by workers in multiple languages.

So what about Alan’s  Peace Prize idea? How would that work? Curious, I looked up the Nobel Peace Prize nomination process. You may not be surprised to learn that only a select few can submit proposals. No self-nominations. Snap.

The Norwegian Nobel Committee is responsible for the selection of eligible candidates and the choice of the Nobel Peace Prize Laureates. The Committee is composed of five members appointed by the Storting (Norwegian parliament). The Nobel Peace Prize is awarded in Oslo, Norway, not in Stockholm, Sweden, where the Nobel Prizes in Physics, Chemistry, Physiology or Medicine, Literature and the Economics Prize are awarded.

So, from what I can tell, we have until September. We need to find a qualified nominator who believes the Space Station international partnership — that successfully designed, built, launched, assembled, and continues to operate our amazing Peace Laboratory in Low Earth Orbit — is worthy of nomination. Right? 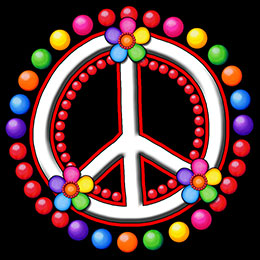 Hey, what about our Norwegian partners? Surely they have qualified friends, wouldn’t you think? If you know anyone who fits the bill, give them a shout for us. You can help us spread the good word — two words, actually: Peace Prize!

It’s amazingly noble — this international partnership in space. Why shouldn’t it be Nobel too?