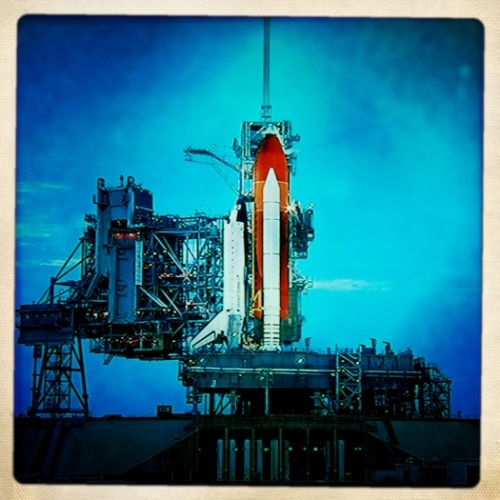 I watched liftoff with fellow space tweeps at the Kennedy Space Center press site where we hosted our final Space Shuttle mission tweetup. More on the tweetup in my next post.

I wanted to share these images with you taken my iPhone Hipstamatic app (thanks to Nicole Solomon, who told me NEVER to post pictures again without Hipstamatic). Now I have a forever memory of Atlantis via this little slideshow.

Skype: It’s a Small World After All!

Yet, technology collapses the distance.

Yesterday, we had our first Skype date. She got off work at 5:00 p.m. — her time. I had the day off, so I was available at 11:00 a.m. — my time. What an amazing, incredible experience. I could see her and talk to her, as if we sat only a few feet from each other. (Yes, I’ve Skyped before — for business meetings. Somehow it feels different with a loved one living so far away.) 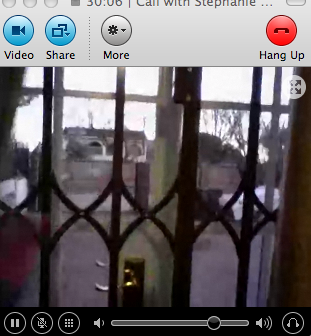 Steph gave me a Skype tour of her new living space. She walked around the room pointing her computer (iSight webcam) at the living area, kitchenette, bath, and window. From the window, I could see the neighborhood and the park she crosses every day to walk to work at the Bethany House.

Our grand plan was to get the iPhone G4 for Steph, once she arrived in Africa. We hoped to FaceTime each other during the year, as well as toggle the iPhone as her internet connection. Alas, she couldn’t get an iPhone, so she bought a regular phone with an South African service provider, and purchased a aircard for internet at home.

During that first week, though, without phone or internet to Steph, my 24/7 instant comm IV felt yanked from my veins.  Once she got back online, my world order was restored.

After Steph and I Skyped, I thought about our astronauts living on top of the world for six months at a time. Technology allows them to video chat with family, just like I did with Steph. Technology connects us — on and off the planet. I, for one, am thankful I can reach my daughter in a moment through e-mail or text messages or Skype video calls.

I can’t imagine surviving on smoke signals and carrier pigeons.

Think about early explorers. They left home to discover new lands, never knowing if they would ever return or see family and friends again.  Many left behind only silence and unanswered questions. 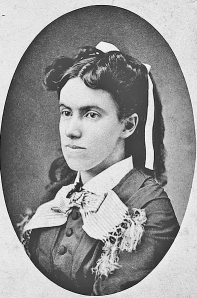 Missionaries Hudson Taylor and Lottie Moon traveled across the world to China in the late 1800’s. While we packed Steph for Africa, I kept thinking about Lottie Moon — a very tiny woman who traveled alone to a land where she knew no one nor spoke the language. I can’t begin to imagine the courage and faith it took for her to say goodbye to her family (perhaps forever) and step on the boat for a journey of many months across angry seas.

Technology puts it all in perspective, really. The same technology that shrinks the distance between us, also reveals the great divide between Earth and other planets in our universe. It connects us with each other, yet isolates us with the knowledge that we humans are alone as far as Hubble’s eyes can see.

Technology allows you to connect with Steph too. You can follow her South African journey at Steph Beck’s Blog. 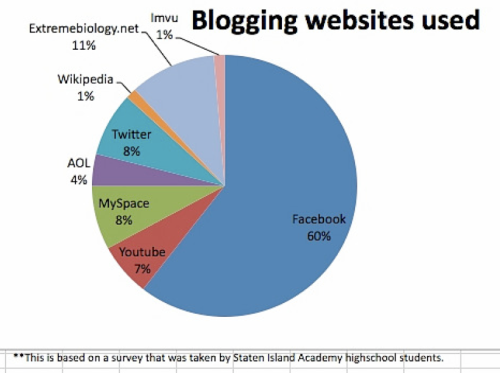 Don’t be Pug, the Biker Pooch

I met Pug, the Biker Pooch, yesterday morning at the motorcycle repair shop where my daughter’s death trap – I mean Bike – was getting worked on. Adorable little Pug. All decked out in his doggie goggles and head gear. He looked like a tiny Amelia Earhart. I fussed over him a bit, took his picture with my iPhone, then tweeted his likeness out to the Twitterverse.

But all the while, I kept thinking, “Am I witnessing Poochie abuse?”

I mean, really. Does little Pug have a choice? His owner, Nice Biker Guy, dresses him up, straps him on the back of his motorcycle and off they go. Does Pug, the Biker Pooch, get a choice? Does he like being strapped on the back of a motorcycle? Does he enjoy the outfit he’s wearing? Is he even safe?

At first I was thinking how sad for the little pup to submit to the indignity of doll clothes. Then I realized maybe the goggles really kept him safe. But hold on. His owner, Biker Guy, gets a real helmet, reinforced jacket, and heavy boots to protect him from flying rocks or, heaven forbid, a nasty spill. Will a little bit of head-mounted leather keep Little Biker Pooch from harm?

Nice Biker Guy told me Pug’s story and how he rescued the little pooch 12 years ago in the DMZ when Biker Guy served in the Army. Pug was a stray. He was scheduled to be “put down,” but Biker Guy asked for a chance with him. From that day on, their partnership flourished. Fast forward to today. Pug’s a pretty low-key kinda’ pup. But I have to wonder, is he just old? The little guy barely even moves. (Yes, he’s alive. He blinked at me a few times.)

So, here’s my question: Does Pug like the direction his life has taken, or has he given up the fight and accepted his fate as a teeny circus show animal?

We’ll never know, now will we? But I started thinking about work. So many parallels.

Sadly, I’ve seen many a Biker Pooch at the office. You know what I’m talking about: employees who appear submissive and lifeless. Each day revolves around doing what they’re told – even if it means dressing up in leather and goggles and hopping on the back of the bike.  Ok, I’m being facetious…but sometimes it looks like that to me.

Think about it. Some of your coworkers may seem to check reason at the door when they clock in. They may assume mandates given by a “superior” must be valid, whether or not they make sense. Time and again, I’ve had colleagues tell me our management must know what they’re doing – as if management has some magic formula to make wrong things right.

Now let’s look at that. Just because someone holds a position of authority, it doesn’t make him or her superior – in knowledge, experience, or even skill. A title on a business card can mean nothing more than words printed on paper. Why, oh why, do we condition our children to think that anyone with a title must be respected  – despite actions that prove otherwise? They grow up worshipping authority. Wanting it. Resenting when they don’t have it. Sorry, here I go on another tangent.

Quick story: I worked for a manager who blustered and brow-beat and strong-armed his way through any discussion. He would stake a claim (decision) and stick with it stubbornly, no matter the documented evidence that his claim might be an unwise course of action. At some point in the debate, he would switch his decision and announce that we misunderstood him because this NEW position had been his ONLY position all along. He blew smoke around the room to make others think they’d lost their minds — never admitting he’d changed his mind. I was amazed how easily my colleagues accepted blame, and bought the premise that they simply misinterpreted the manager’s position. One colleague gushed about how brilliant this manager was. His reason: everyone in the room appeared confused and clueless. I suggested perhaps the “brilliant manager” was spreading confusion to mask his own cluelessness. Ah, the heresy.

My point: Just because management makes a decision, doesn’t mean the decision is right.

So what do you do when the decision doesn’t feel right? Ask questions. Nicely. Discretely. Respectfully. But, don’t just “follow” a decision because someone above you makes it. We all make mistakes – from the lowest to the highest levels. Checks and balances, the foundation of our entire federal system, play an important role in any organization…or family, for that matter. Listen to your gut!

So let’s get back to Pug, Little Biker Pooch. He really doesn’t have a choice, now does he? He could bark and fuss and make a stink. But how do we know he didn’t do that in the beginning? How do we know Nice Biker Guy didn’t break down his resistance and force him into submission through the 12 years they’ve been together. How do we know Little Pug didn’t merely gave up trying?

Moral to the story: Don’t submit to questionable decisions at work (or with family and friends) against your better judgment. Don’t assume others know more than you and, therefore, their decisions must be right.

Think! Question! Probe! Decide for yourself!

If, however, you like the goggles and leather head gear, by all means strap yourself on the back of the bike and enjoy the ride. If you don’t, take steps to STOP the MADness.

Remember: You have a choice, unlike little Pug.