After two days on the National Mall with the NASA exhibit to celebrate the 40th anniversary of Earth Day, I can literally say I’ve become a dust-of-the-Earth kinda’ gal. The saying “ashes to ashes” (volcano ash), “dust to dust” (dust tornados to be precise) holds new meaning for me this week. I feel Mother Earth trying to claim me as her own this week. Fitting, I guess, for Earth Day week. 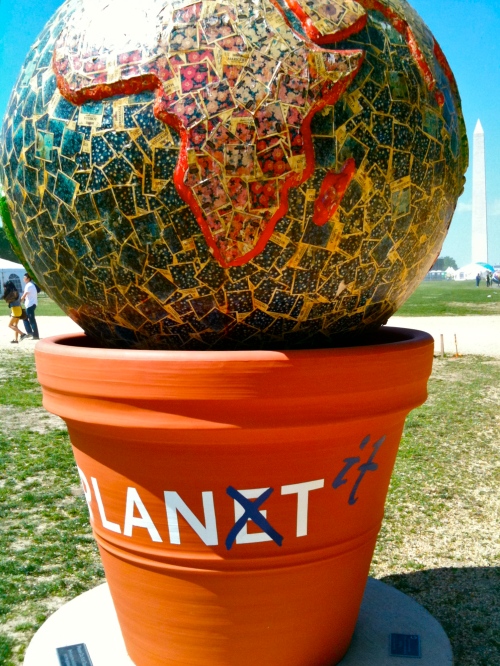 NASA participated in the Earth Day Network celebration with tents and activities on the Mall. We brought a flown Space Shuttle tire for visitors to sign and decorate. We’re recycling the tire to let folks touch something that’s actually flown in space, and leave their “mark on space” by signing/doodling on the tire. 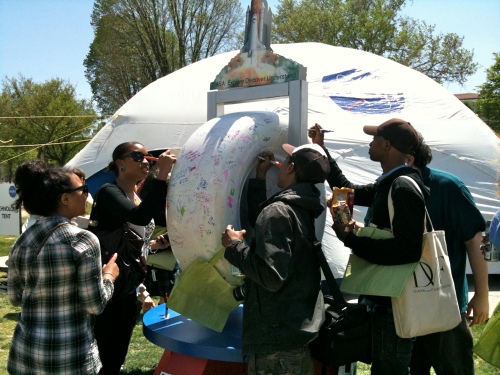 Graffiti Tire AND Display on Sunday

Yep, we love to leave our mark on history — as you can see.

We also took our Spacesuit Photo Op display out to the Mall for visitors to step inside for a spacesuit portrait. Always fun for Earthlings of all ages.

(We can even show proof of space cooperation with the Chinese…Panda bears, that is.) 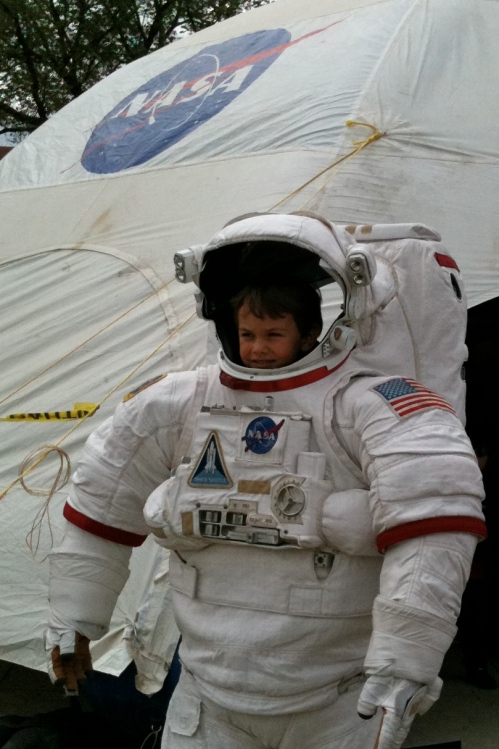 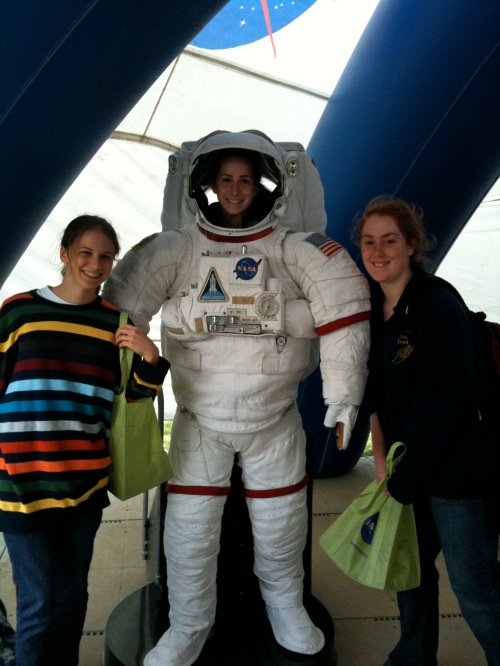 We held our first-ever Earth tweet-up yesterday. I don’t work in the Earth science program at NASA, but cool that I was working the Mall exhibit and had the chance to chat with Space Tweeps all day. Serendipity for me. Except that while I talked to Tweeps, people signed the Shuttle Tire DISPLAY holder, rather than the tire itself. 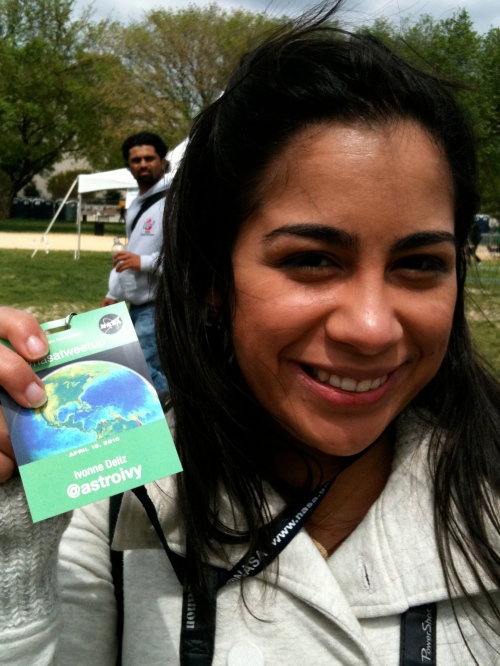 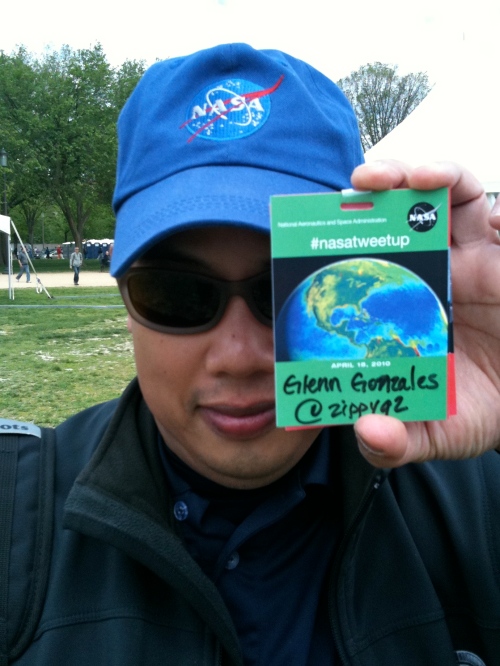 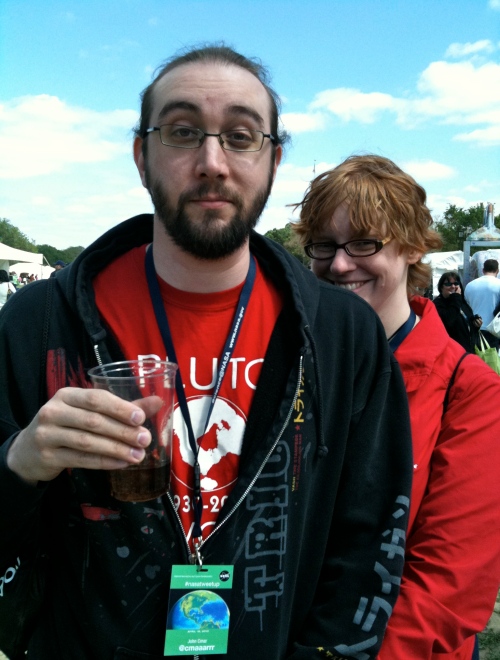 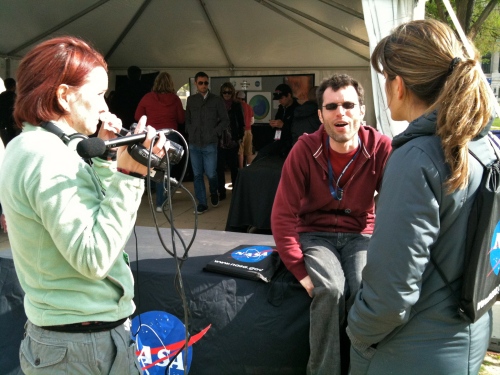 I really enjoyed meeting Manoel Belem, astronaut-candidate in Brazil — back when they were partnering with us on the International Space Station. Manoel flew here from São Paulo JUST for the NASA Tweet-up. Manoel shared with us about Brazil’s first astronaut Marcos Pontes who trained with the astronauts in Houston, before his country made the decision to fly him to space through the Russian space tourist program. Marcos launch with the Expedition-13 crew from the Baikonur Cosmodrome in Kazakhstan on March 29, 2006 and spent eight days in space. Brazil shut down the astronaut program, leaving Manoel without a flight to space. He’s still dreaming of the day he fulfills his zero-g dream. In the meantime, he’s active in social media as @mlbelem.

Great conversations with all of you! But, I have to say, the highlight for me was holding @astroIvy’s iPad in my very own hands. I so SO want one!

Browse the Earth Day pics the Science Mission Directorate posted on Flickr. (The Earth dome in the Flickr pictures blew over. We’re hoping Mother Earth calms down during the week so we can pitch the tent again.)

We’ll be on the Mall all week through next weekend. Come learn more about NASA and space, if you’re in town. (And dress for winter!)