I’m SNOW Over It!

Let me share the tale of my harrowing Snowmaggedon The Sequel experience from today’s blizzard.

Has it been less than a week since the last snowpocalypse? Oh my!

With multiple layers of snow and ice and snow and ice and snow, we’ve been warned to listen for creaking sounds from the roof (cave-ins) and cracking sounds (downed tree limbs). My house is surrounded by big old trees. Really big. Really old. I’m ever wary in big storms for fear a tree might land in my lap. All this to say, I’ve been checking at every window for signs of something not quite right.

My problem. Scaling my 6-foot high snowberg to get up to the hill to reach the broken branch, held up by one single, solitary cable wire. (I must really like my cable service to attempt an outdoor rescue mission in a white-out conditions with 40 mph winds.)

Snowberg (left) in front of my car (midde).

So I climbed, using my trash can and recycling bucket — thank you City of Alexandria — and reached the high ground, only to sink waist-deep in snow. I stepped on top of one of my poor bushes (which may not live to tell the tale) and reached up to snip a few low hanging branches. But I kept sinking where I couldn’t reach the tree branch.

A snowplow driver came down the street at this point. He hovered for a bit. Perhaps he was curious? Perhaps I was an amusing side show. Perhaps he thought he might need to rescue me? I could easily have tumbled off the hill to the ground below (but I think I would only get swallowed by snow rather than break anything– unless, of course, I fell on my hedge clippers. Ouch.)

MacGyver Moment: I fashioned snowshoes (snow bridge if you want to get technical) from clipped branches to support my weight to allow me reach the top branches of the broken limb still caught by the cable.

Waist-deep snow: snow bridge of limbs to stand on.

I was so proud of myself as I clipped merrily away standing precariously on my tippy toes on top of a pile of branches. Proud, that is, until I heard the branch (barely held up by the cable at this point) crack loudly. I knew it was coming down.

Question was: would it take me with it on its way to the ground?

The snowplow driver was back now, watching me again. (He could’ve actually gotten out to help, had he been really worried. But no. He just watched.)

I snipped my last snip, freeing the cable from its prison. The tree limb came tumbling down behind me, missing my head. Whew! The snowplow driver drove away. I came back inside to find my cable still worked. 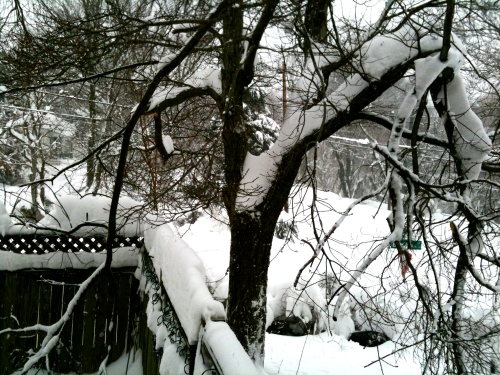 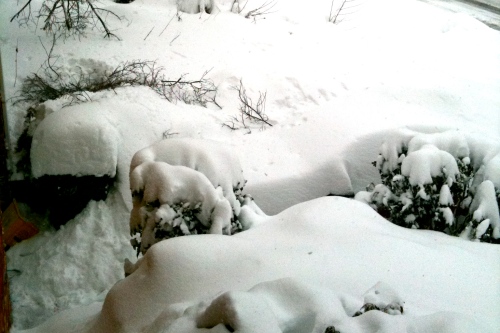 View from front door. That's my car buried down there. 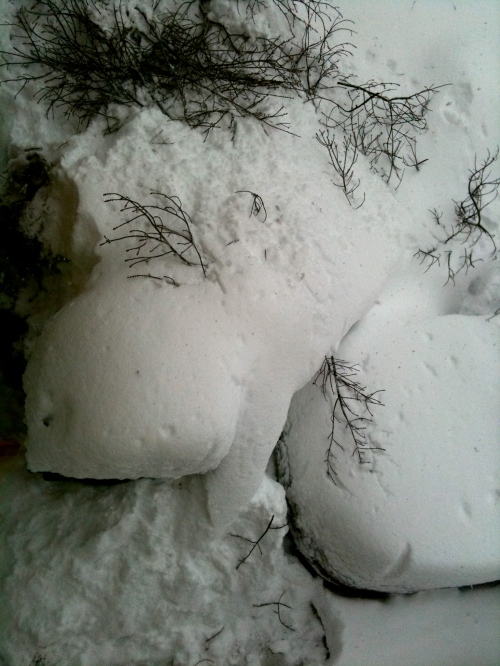 All is well with the world. Until I have to get out and shovel again.

Snowmaggedon The Sequel: I’m SNOW over it!