Today in Space: Savor the Moment

Take a peak at STS-130 Space Shuttle Endeavour docked at the International Space Station 220 miles over our heads with Planet Earth as a backdrop. Wow. Both spacecraft are traveling at 17,500 miles per hour around Earth right now. Can you imagine? 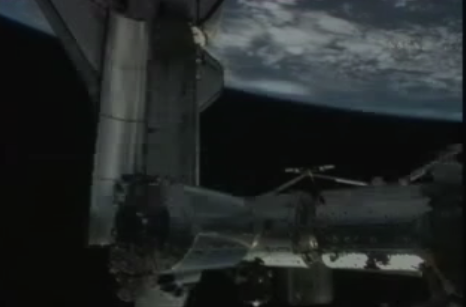 Savor this view. Only a few more times in your life will you see a Space Shuttle docked to Space Station.

If you follow space at all, I’m sure you’re aware of the debate about the NASA budget and the decision to retire the Space Shuttle. It’s all over Twitter, Facebook, blogs, newspapers. Fervent water coolers arguments, I’m sure.

Some cheer the end of the Shuttle and Constellation program, believing commercial providers can fill the gap.

Some mourn the loss of U.S. transportation capability, and believe NASA is lost.

Friends and colleagues outside NASA contact me to check in — see how I’m doing.

Let me assure you. I’m fine. NASA is fine.

We’re not going away. But yes, we’ll be going about our business differently. We received extra money in our budget over the next 5 years to advance technology. We’ll purchase our transportation and supply needs from available providers. (Those of you who know me have heard my predictions about future options. But those are water cooler conversations. Not blog talk.)

We don’t debate budget decisions. We make cool things happen with what we’re given. 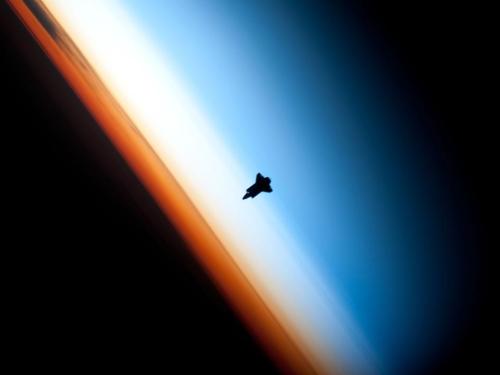 Let’s talk about the Space Shuttle fleet. These amazing winged spaceships have served us well for many years. Well beyond our expectations (just like our adorable Mars Rovers).

But to keep the Shuttle program going means money spent on upgrades and refurbished parts. To go beyond Low Earth Orbit, humanity needs a different ride. Think of it this way:

Everyone will answer these question differently. Just understand none of the choices are easy, but that’s why we’re NASA.

We do hard things and make them look easy. We solve problems against all odds.

I’m excited for our future, though I’m emotional about the last few flights of the Shuttle. I’m really hoping an entrepreneur comes out of the woodwork with a space transport solution that requires no spaceship (hey, why not?), or a cute little George Jetson-mobile that I can zip around in (kinda’ like the X-38). 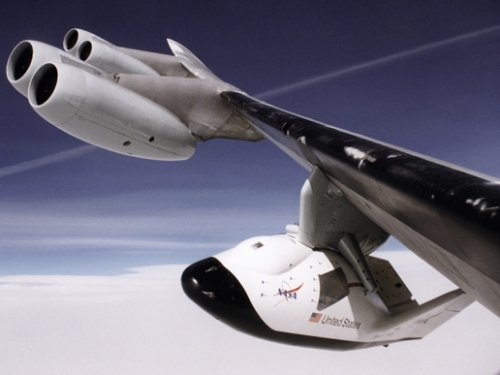 As we close out the Space Shuttle program (and for those who mourn Constellation),  I leave you with this thought:

“Don’t cry because it’s over. Smile because it happened.” Dr. Seuss

My youngest daughter, Steph, is a Houston Astros baseball fanatic. She grew up wanting to be Craig Biggio. She lives and breathes for the game, watches them on her computer, knows the stats by heart.

Two summers ago, she came home for a visit with one purpose in mind — watch the Astros play a 3-game series against the Nats in their new stadium. I’d never been there before, so we headed out for our adventure in southwest DC. We bought our tickets to sit above the Astros bullpen, so she could be close to her boys. 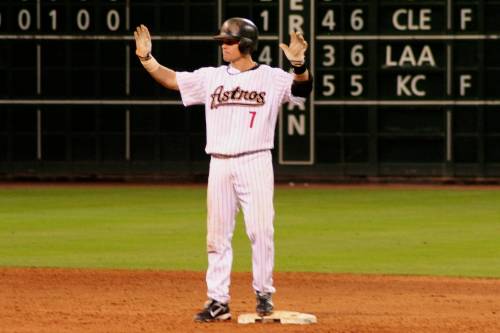 My daughter's fav baseball player ever!

During the game, a man and two boys sat down next to us. One of the boys wore a NASA shirt. I asked where he got his shirt. He pointed to the man next to me and said his dad worked at NASA.

What an amazing coincidence. Of all the seats in the National’s Ballpark, two NASA employees end up sitting together.

I asked his dad where he worked. Houston, he told me. We chatted for a bit before I discovered he was an astronaut. Turns out he’d come to the game to throw out the first pitch. He brought his son and nephew along with him. Really nice guy. 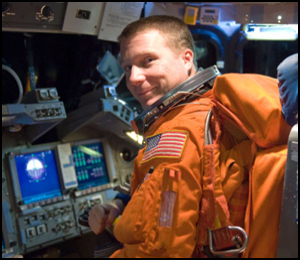 I share this with you now because he’s up in space right this very minute. He broke the bonds of Earth yesterday on his first flight to space. And how cool is that?!? He’s circling the planet at 17,500 mph while I type. 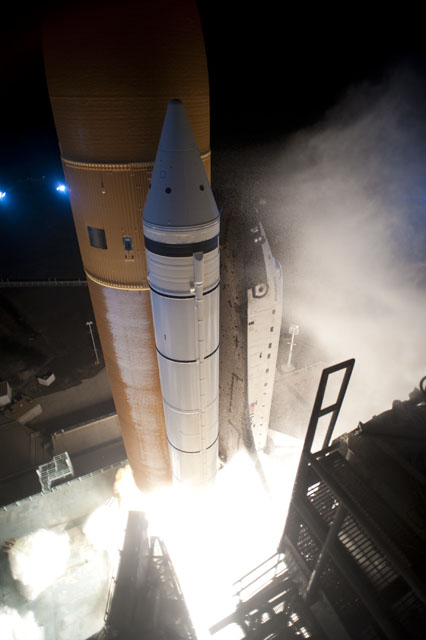 Today’s STS-130 Flight Day 2 wake-up call was dedicated to Terry. Great song by Brandon Heath, “Give Me Your Eyes.” Wake-up calls for Space Shuttle missions are chosen by family and friends. The song selection says a great deal about the person, I think.

I’ll share a few lyrics from “Give Me Your Eyes” by songwriters: Brandon Heath and Jason David Ingram. (The lyrics themselves serve as a wake-up call for service to the forgotten and broken-hearted.)

“Looked down from a broken sky. Traced out by the city lights. My world from a mile high. Best seat in the house tonight. Touched down on the cold black top. Hold on for the sudden stop. Breathe in the familiar shock. Of confusion and chaos.

All those people going somewhere. Why have I never cared?

Oh, sorry, I got caught up in the whole rhythm and rhyme thing.

Getting back to the event that started this whole story. I don’t recall whether the Astros won or lost. Steph can tell you, though. She’ll remember who got what hit. Who scored. How many runs batted in. How many errors.

But she won’t remember which astronaut she talked to. I will. I’ll be able to tell you how many times he flies. How many hours in orbit. What music he likes. And so on.

At least we’re keeping space in the family. Steph has stars in her eyes for Earth-bound Astros. I have stars in my eyes for Astros who leave Earth. Life offers such interesting parallels. Don’t you think?

You can find out more about Terry and the STS-130 crew at NASA.gov.

Ideas on How to Open NASA? Spill!

Are you someone who knows exactly what it takes to make NASA the best agency possible? Do you doodle ideas on cocktail napkins and mail them to a NASA Center? Do you wake up early in the morning to watch Space Shuttle launches (like this morning’s 4:14 a.m. EST STS-130 launch) or stay up all night for mission coverage of Space Station? Do you wish you could wear a NASA badge and sit in a cubicle somewhere in the bureaucratic maze at a NASA installation?

Have we got a job for you!

Get your creative juices flowing. Capture all your ideas. We’re listening. You have until March 19, 2010 to share your ideas with us about how NASA can be more:

We’ve deployed a cool idea-sharing tool to let you give input, comment on input of others, and vote ideas up or down. Your ideas will feed into NASA’s Open Government Plan. You need an account first, but that’s as simple as adding your e-mail and a password.

Go ahead. Give it a try.

And if you find any ideas by me in the system, feel free to give them a generous thumbs up!  (I’m just getting started….)

“We are continually faced with a series of great opportunities brilliantly disguised as insoluble problems.” – John Gardner 1965

Crosspost on GovLoop and OpenNASA.

I’m snowed in. I should be shoveling out. But, I really don’t feel like it. I’m not in the mood to exert the energy required to uncover almost two feet of snow. If I were smart, I’d be shoveling out every couple of inches. Or if I were really smart, I’d move to the British Virgin Islands. Yet, here I sit — a blanket of white falling hard and fast out my windows. No end in sight.

While I sat here, posting info on tomorrow’s Super Bowl Sunday STS-130 Space Shuttle launch on Facebook, I ran across this X-files-looking Hubble image of a “mysterious X-shaped debris pattern and trailing streamers of dust” that astronomers have never seen before. 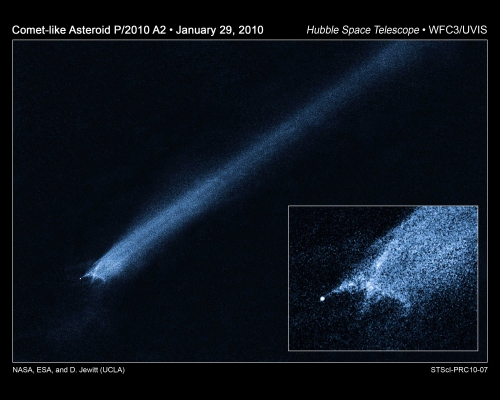 I know this can all be explained-away by science. Here’s what NASA has to say about it: “Hubble shows the main nucleus of P/2010 A2 lies outside its own halo of dust. This has never been seen before in a comet-like object. The nucleus is estimated to be 460 feet in diameter.”

But…what if it really is a spacecraft of some kind?

Ok, let’s stop here. Let me warn you that I have a vivid imagination. …Now, with that said, hear me out.

What if this crazy blizzard is a cover for a planet X-teroid invasion?

Look at the timing. Hubble catches a glimpse of the advance X-ship. Then, the snow storm of the century hits our Nation’s Capitol!

Rather suspect. Wouldn’t you agree?

In the meantime, I’ll leave you with some of my crazy blizzard shots. Then, I guess I have no excuse left NOT to go shovel my way out. 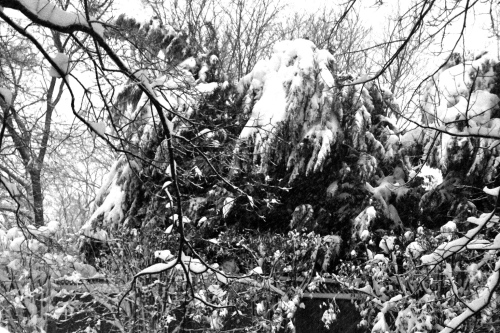 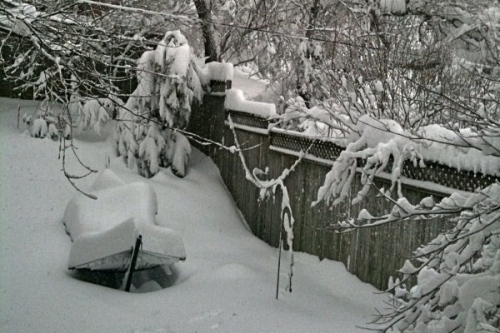 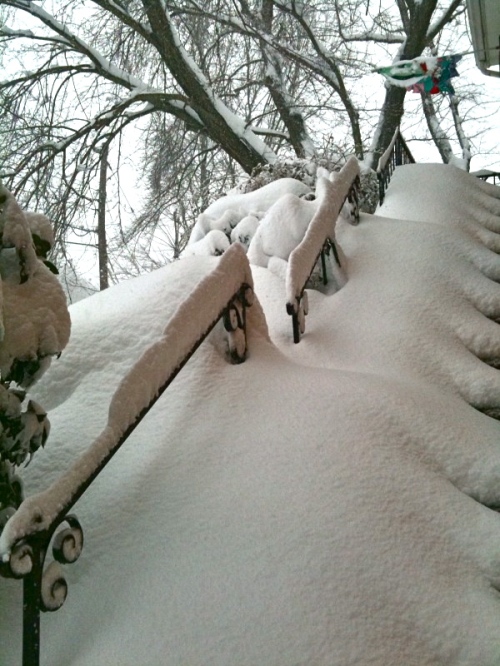 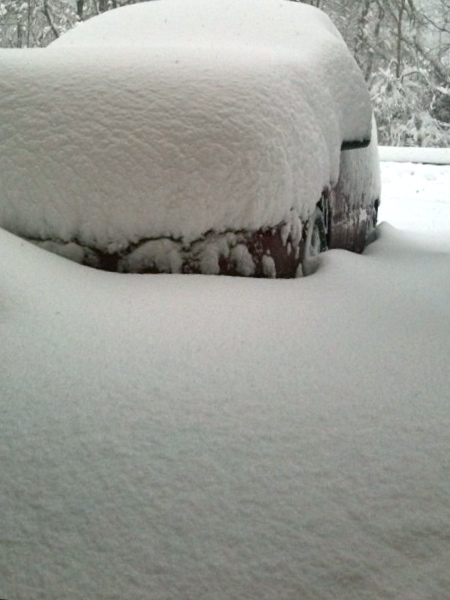 snOMG is devouring my car