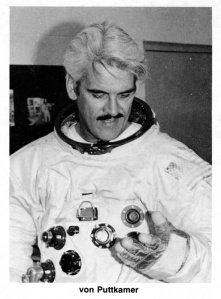 German-born Jesco Von Puttkamer came to NASA 48 years ago to build rockets with legendary Wernher Von Braun. I’ve known Jesco for almost 20 years now, since I first came up to NASA Headquarters in Washington D.C. from the Johnson Space Center in Houston.

What can I say about Jesco? He’s a force to be reckoned with. I’ve known him as one who stands his ground. I’ll leave it at that.

In the 1990’s, I worked in international relations at NASA Headquarters as the German Desk Officer.  In this job, I witnessed Jesco’s rock star status in Germany. Everywhere I went, the German’s wanted to know if I knew Jesco or if I could get Jesco to come speak at their events.

So why am I introducing you to Jesco now?

Simple. Jesco and I spoke on the “Future Directions” panel at the International Space University’s “Public Face of Space” Symposium last week in Strasbourg, France. His talk moved me to tears.

Here’s what I learned about Jesco last week that I never knew: 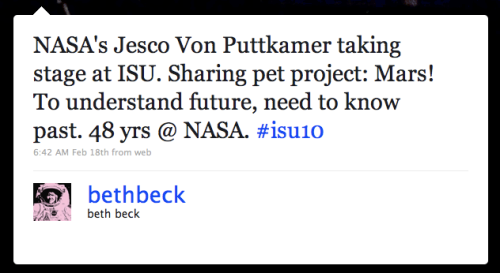 Who knew? I always understood he liked to build rockets and track Space Station. But Mars? Wow. Somehow I missed the destination-side of who Jesco is.

I like to think of Jesco as the Forest Gump of space — always right on the fringes of every historical moment. Prime example: Take a look at this picture of President Kennedy touring the Space Center with Wernher Von Braun. Jesco stood on the street corner as the car drove past. 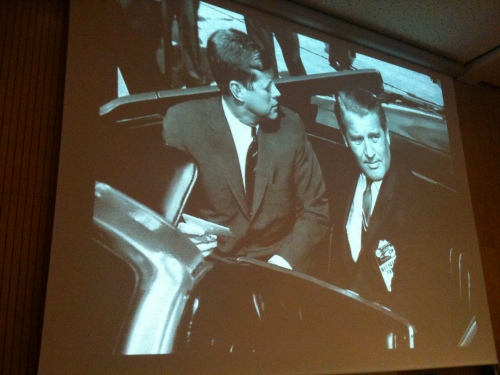 I’d never caught his passion before. Jesco’s presentation took us back to his years at the Marshall Space Flight Center, the very center of the space universe, the birthplace of all things space — until, that is, we learned the Soviet Union had their own space Capitol where they worked as feverishly as the Von Braun team to be #1 in space. 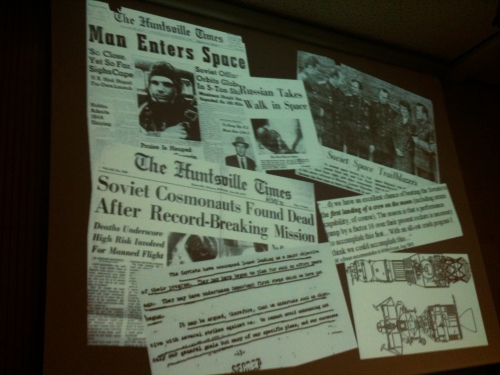 Here is Jesco on his first day on the job. 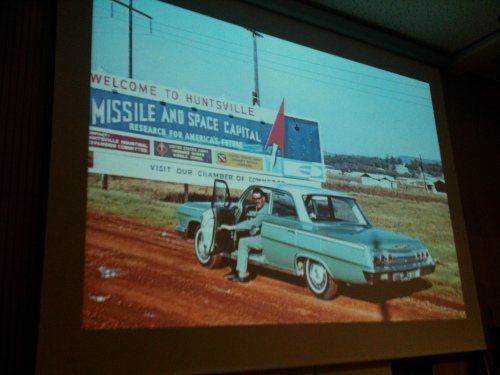 Young Jesco on his first day on the job.

He spoke passionately about how he took no vacation for eight years because he feared missing an exciting breakthrough. None of the team wanted to go home at night. (Let’s not talk about the toll on their families.) The point of his talk: we can’t go forward without understanding where we’re coming from. 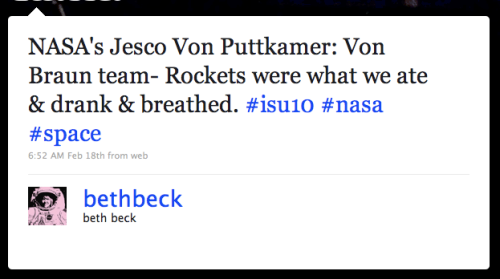 Rocket guys married to the job.

I knew Jesco was passionate about the past. That wasn’t news to me. What utterly shocked me was his passion for the future. I’d never connected his love of all things space to a particular destination — Mars. And to see his face light up when he spoke of it, reminded me of the little boy in him dreaming of what might be someday.

I knew Jesco, the pragmatist. I’d never before seen this Jesco. Jesco, the dreamer.

I write this post as my way of saying thanks to Jesco for all his dedication and sacrifice and passion for the journey to the great unknown we know as space. During the Q&A portion of our Future Directions panel, I liked his response to the question, “Why space? Why bother?” (My paraphrase.)

Thanks Jesco for pushing the space frontier out even further to get us closer to your passion: Mars.

His presentation will be available on the International Space University website. For more tweets from the ISU conference, I created an archive.

Today something amazing happened. Did you notice? A Canadian, Russian, and European launched on a Russian rocket from the Republic of Kazakhstan in Central Asia headed 220 miles in the air to dock with an orbiting outpost built by five partner nations representing 15 member countries. Waiting to greet them? An American, Japanese, Russian crew. We listened to Mission Control chatter in Russian with English translation.

Hey! What is exactly going on here?

In the ghost of NASA past, we successfully reached the Moon to compete with the evil Soviet Union. We just unearthed a mountain of documents from the Father of our space program, Wernher Von Braun. Included among his 10-15,000 papers, a letter to President Kennedy outlining the reasons we should go to the Moon. All about those dastardly HammerAndCycle-ites, the Communists!

Fast forward to today, we’re good buddies with the Russians. We overcame our differences to shape something important for humanity—an off-planet habititat where we can learn how to live in a hostile environment with minimum comforts of home. Heck, we even take turns with the Russians to “Command” the International Space Station. Yes, you read this right. Expedition Mission Commanders rotate between an American Astronaut and Russian Cosmonaut each Expedition mission.

What a milestone for us today! With this launch to Station, we increase the population from three to six who live/work/play on orbit traveling at a speed of 17,500 mph around the planet 24/7 in 90-minute orbits. For the first time, all our partner space agencies will be represented on Station: NASA, the Russian Federal Space Agency (Roscosmos), the Japan Aerospace Exploration Agency (JAXA), the European Space Agency (ESA) and the Canadian Space Agency (CSA).

My take-away from this amazing moment: We find ways to get along when we want badly enough to get going! No cultural or ideological barrier can stop us if the need is great enough.

Any partnership is only an invitation away. Lead the pack. Make the first move.

And let’s face it, we can’t explore the cosmos on the back of the tax-payers from any one nation. Space is humanity’s playground. My prediction: in the not-too-distant future, we’ll be partnering with China, Korea, and Iran. (After all, they like to launch things too.)

Wouldn’t it be SO cool to create the Human Space Agency and wear an Earth Badge? Maybe in a few tomorrows from today we’ll see it come to pass. Today proves we’re on the right path with our Station partners. We’re proving we can work together to do this thing called space.

Humanity’s destiny is to expand our knowledge of the unknown. Earthlings, UNITE!